Every family has at least one desperate woman, and I guess Fannie, ( my 1st cousin, twice removed), is ours.

According to COURT DOCUMENTS, in 1912, a Mr. A. E. Sprague found himself widowed and lonely. He was 79 years old and his wife had died the year before. All of his children were gone, so when he heard about Fannie from a friend, he wrote to her explaining his situation. She “immediately answered saying she was the woman he was looking for!” Did I mention that Mr. Sprague was a man of some means? So, no playing-hard-to-get for Fannie. 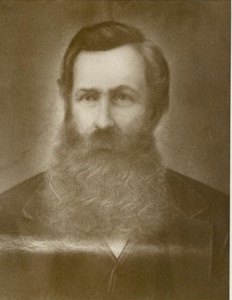 I think we can all see why!

Mr. Sprague alleged in his SUIT that he decided to come for a visit. Upon his arrival, he fell terribly ill, so ill that no one thought he would recover. So what did my cousin and her family do? Why, get a preacher to come and perform a wedding at 2.am. of course! It should be noted that Mr. Sprague was 79 and Fannie was 37.

In case you feel bad for Mr. Sprague, here are a few details that came out in the deposition:

He did agree that if she should return to him and remain as a wife should, that he would place $1000 in the hands of a friend… accumulating interest which would be for their use during his lifetime and after his death she to get the principal… and be buried beside his former wife with tombstones like at her grave and before this agreement she deserted him and brought this suit.

The charge he had murdered and robbed a man are untrue…”

The lawsuit isn’t the saddest thing about poor Fannie and her hasty marriage. Despite Mr. Sprague’s advanced age, Fannie became pregnant. She, along with her twin babies, died during childbirth.

The reason I’ve become so interested in my own history lately is because my upcoming book is about a young girl who researches her family history to save her house. In an interesting twist, Fannie and her twins died on September 29, 1915 exactly 100 years to the day that my book is being released!

Get to know your family history at www.ancestry.com!