Lessons from the Front Lines of #PitchWars 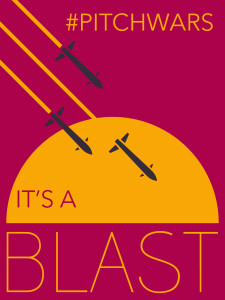 When I got a message last week from Brenda Drake regarding filling in as a mentor for Pitch Wars, I was hesitant. I wanted to be involved, but I’m on deadline with my own revisions, and it would make things a little tight.  Still, the absolute best thing about this whole publishing process for me has been the ability to connect with and encourage other writers, so I decided to go for it. I am so glad I did! I’ve been happily reading submissions since Friday and I’ve already been reminded of some very important lessons.

1. The QUERY is vitally important.

The first thing I did when I got my submissions was to quickly read through the queries. There were several that really popped and I couldn’t wait to read the 1st chapter.  Because I want to give everyone a fair shake, I read everyone’s 1st chapters, not just the ones that grabbed me, but a busy agent would probably just pass. Work that query until it shines before submitting.

There were some real standouts in my folder. Whether it was the voice that I connected with, the hook, or just good old-fashioned story-telling, I wanted to read more. Obviously, you don’t want just one good chapter; the whole book has to be well done, but a great first chapter shows what you’re capable of producing. Make that first chapter sing!

3. REJECTION Does Not Mean What You Think It Means

If you’re participating in Pitch Wars, your ears are probably burning. The mentors have been talking about their favorites, trying to decide which ONE they will eventually pick. There are several entries that consistently show up on all the lists, but due to the ONE limitation, there’s a good chance many good ones won’t get picked. In the end, we have to choose based on what manuscript speaks to us, which ones can we connect with, and which ones we feel like we can help. I’ve had particular issues when revising my debut novel, and it gives me perspective to help the novels that have the same issues. It doesn’t mean that I don’t love other submissions just as much, but again, I can only choose ONE. Rejections come for many reasons, but when an agent tells you that it’s just not the book for them, don’t take it personally. There are others who will love it.

I stepped in when one of the mentors had to drop out and I’m not sure she would make the same pick that I eventually choose. Maybe. Every mentor has their own likes and dislikes, just like agents. There’s really nothing you can do about timing, other than to show up and do the work consistently. When my book was out on submission, a great editor replied that she really liked it. Yay! The problem was they already had a similar book set to launch. Bummer. Agents change jobs right after they’ve asked for more pages, editors who are interested in your novel retire, books come out with your same hook – don’t let it get to you. Just keep writing and it will eventually land on the right desk at the right time.

5. Be proud of what you CREATE.

I have read so many fun stories. Even when they’re in the same genre, written for readers of the same age, they are all different and interesting and creative. What really gets me is that these are stories that DID NOT EXIST before the writer put them to paper. How awesome is that? Getting a publishing contract is a good thing, but don’t ever forget that you created something from nothing. That is something no one, and no rejection slip, can ever take away.

Good luck to everyone involved in Pitch Wars. You’re already awesome in my book.