From the Friday History Files

Letters are a wonderful resource if you’re interested in your family history. In REBELS, Lou finds a letter in an old family bible. In my life, my mom has several letters that family members have  shared. The one below is from my great-uncle James Meadows. He’d just learned that a sister had died and in it he reminisces about being a young boy and spending time with his brother-in-law, Hick.

Hick and I go back a long ways. I worked for him on the farm when I was a teenager and among other things we raised a tobacco crop. I was told that I would get $10.00 a month and room and board. I got the room and board but I never did see the $10.00. And I had to sleep in the same room with his mother.

Hick’s mother was a nice old Lady. She liked me, we got along real good, but her and Ermon did not get along very good. When Hick was making Moonshine, someone pulled a raid on his [stash], just like it was the law. But the only thing that they took was the worm. He was so sure that he knew who did it. So we pulled a raid of our own, and we took his worm and all of his whisky. When we were there in ’83 Hick said, “You know, I think we got the wrong guy.” I was only about fifteen. I got a quart of good whisky out of the deal. 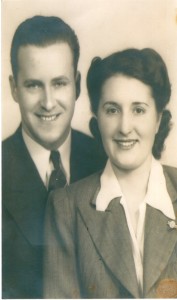 Good to know there was a time where you could pay 15 year olds to raid illegal moonshine operations with the stolen whiskey!

Uncle Jimmy is a real character and in our family, that’s saying a lot. He’s pictured above with his second wife, but it’s his 3rd that really rocked my world. We’ll have to save that for another post!