Skip to content
Home > History Fun > From the Friday Files – A NYC Connection
Published May 22, 2015 by Lisa Lewis Tyre

From the Friday Files – A NYC Connection

In my upcoming book, LAST IN A LONG LINE OF REBELS, Bertie is not a big fan of Yankees. I hope she’s wrong about them since I’ll be heading to New York City next week. I’ve been a little worried about fittin’ in, but it turns out that I’m a descendant of a very prominent New Yorker!

According to my mother and her genealogy research, my great-grandfather was a fellow named William Layton Meadows. His grandmother was named Pauline Stewart. Pauline’s father was David Stewart, a direct descendent of Dr. John Stewart who married Elizabeth Alberti. Whew. Are you still with me? Okay, drum roll please….. Elizabeth Alberti is the grand-daughter of Pietro Cesare Alberti! Who is Pietro Cesare Alberti you ask?

Per Wikipedia: Pietro Cesare Alberti (1608–1655) was a Venetian immigrant to the Dutch colony of New Amsterdam, commonly regarded as the first Italian American. Alberti was the first of millions of Italian Americans who would later form part of American culture. June 2 commemorates “Pietro Alberti Day” in New York City. A small stone in Battery Park marks the spot of Pietro’s arrival. The Albertis farmed 100 acres in Brooklyn until Pietro and Judith were killed in an Indian raid in 1655. 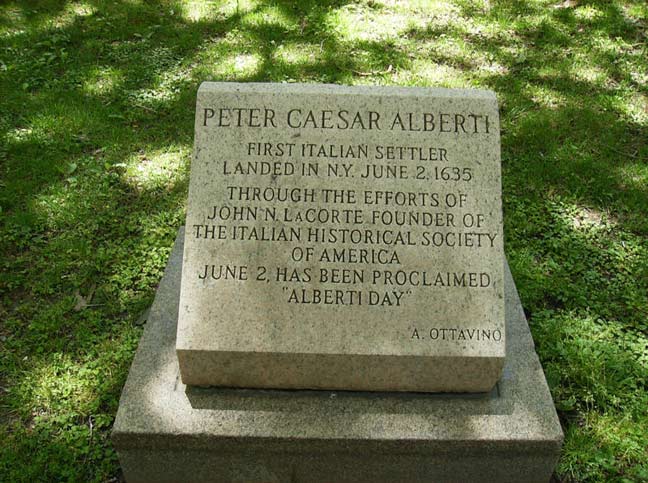 It’s a shame that I’ll be done with the Book Buzz  event and on my way home before June 2. I bet the Alberti Day fireworks are spectacular. Also, I’d like to look into that whole 100 acres in Brooklyn thing. You’d think the city could throw an acre or so to a descendent after letting poor Pietro get killed by Indians!