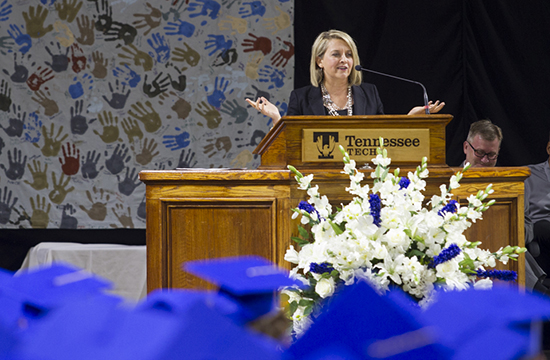 I was  recently asked to give the keynote speech at my high-school graduation ceremony. It was a great honor and not something I ever imagined happening in my life. I’m sure no one was really listening since I was the least important person there, but I thought I’d post a transcript in case anyone wanted to see what I had to say. This is just like being there without having to witness the flop sweat and constant lip licking. Enjoy!

Thank you. As a writer, I love this idea that our lives are like a story, so to be with you at such an important chapter in your story, even as a small footnote is exciting for me. I’ll admit it’s also a little surprising to find myself a keynote speaker, considering the type of student I was while at LA.

On the day I graduated I only knew two things about my future. One was that in a few short months I’d be following my friend Gina Coleman to Murfreesboro where we were going to start college at MTSU. And secondly, I knew that immediately following the graduation ceremony, I was going to Dale Hollow Lake because Martha Carmack’s daddy had taken the family camper there for us and a group of girls were going to have a graduation party. And I was super excited and had put a lot of thought into one of those things. The other, not so much. I figured whatever happened, happened. I wasn’t a particularly focused or ambitious student.

Obviously something changed for me during the years after graduation and ultimately I was able to fulfill my dream of publishing a novel and having a career as a writer. Today I’d like to share with you three things that I think made a difference, in the hopes that they’ll help you, no matter what you dream of doing.

I know that this is not revolutionary or new advice. Someone probably said something similar at my own graduation, but the world was much different 30 years ago. You have an ability to connect on a global scale and technology that we could only dream of, and I am convinced that there has never been a better time in history to do what you’re passionate about. And make a living at it!

Pretty much anything goes. I met a man a couple of months ago who has built a multi-million dollar agency teaching people my age how to market to people your age using Snapchat. Cause we don’t get that app. I want to get it, but I’m sorry, I don’t.

There are people making a living by taking videos of themselves being stupid and putting it on YouTube. My mother will tell you that if that had been a career option when I was 16, I could have retired by the time I was 20!

Passion can overcome logic. I have a sister who is 5 years older than I am. That’s not relevant to the story I just like telling people that she’s older. My book came out in September and she called me and said, “I’ve been so inspired by watching you do what your passionate about, I think I want to do something; I want to start a blog but the only thing I’m passionate about is fashion.” I was like, go for it, but I understood why she was hesitant because on paper it didn’t make a lot of sense. As fashionable as my sister is, she lives in a small town where the only places to shop are WalMart and the QVC outlet store. Not exactly the fashion capital of the world. But she started posting every day, and now 8 months later, she is getting over 300,000 page views per month and brands from all across the US are emailing her to advertise with her! I call her every week asking her to link to my book!

The point is, the sky’s the limit on what a person with passion, self-belief and who’s willing to do the hard work can accomplish.

Working hard is the second half of the passion argument. The dreaming is the easy part, it’s the doing that is difficult. I spent years dreaming about writing, reading books about writing, going to conferences about writing. What I didn’t do was actually write, and it wasn’t until I began to actually do the work that things began to change for me.

Now for some of you, the passion and job will go together nicely. You’re passionate about animals so you’re going to be a vet, or you’re passionate about kids so you’re going to be a teacher. If you’re a creative type it might look differently for you. (This is my disclaimer portion so that I don’t get angry letters from parents saying that I told their kid to drop out of college and start a YouTube channel.) When I decided to get serious about writing, I had a full time job, and I kept that full time job. You see, I learned that passion doesn’t mean something that you love, passion comes from the word PATI which means to sacrifice for, and I loved writing enough to sacrifice my mornings and sleep and my weekends with friends to spend time in front of the computer. I was productive in spite of my job.

Be open to it looking different than you expect.

I have a young friend who has always been passionate about the people of Guatemala. She went on a mission trip as a middle-schooler and it made a lasting impression on her. She thought about becoming a missionary herself, and then she considered teaching English, but she realized that there were already a lot of people in the country doing that. They didn’t need another missionary. What they needed was basic supplies that are difficult to get. Now she’s a flight attendant and she flies the Atlanta to Central America route taking things like medical supplies, toothbrushes and shoes to the people of Guatemala one carry-on at a time.

There are a lot of different ways to be productive and it doesn’t really matter as long as whatever you do makes your heart sing.

Secondly, if you don’t like the way your story is going, write something different.

When I was in 7th grade I got my first F. An F is never a great thing, but what made mine especially noteworthy was that I got it in PE. I remember Mrs. Arney called me and my friend that I probably shouldn’t mention but I will, Tami Poston, into her office and she said, “Girls, you’re getting an F for the semester. Instead of doing what you should have been doing, which is learning to play tether ball, you’ve been sitting on the grass talking to boys.”

Of course I was upset. My parents were mad, Mrs. Arney was disappointed and I don’t think Tami’s mom ever really liked me after that. But here’s the thing – I have never let my failures define who I am. To be honest, I don’t let my successes either, because both are fleeting. No matter what your failings are, or mistakes you’ve made, or labels you carry, you are the author of your story. As long as you are here writing your story, you can turn the page and write something new. I am a human plot twist. And I’ve found that most failings look different with time. God Bless Mrs. Arney, but the truth is, the ability to carry on a conversation with the opposite sex was way more useful to me that tether-ball.

Finally, surround yourself with good people. By good people I don’t mean perfect people, but people that are in your corner, that are on your side, because dreaming big is hard and you’re going to need encouragement on hard days. And the easiest way to get good people in your life is to be a good person for them. Be the kind of person that when your friends share that they’ve gotten into a great school or their dream job on Facebook, like it and mean it. There’s not a bucket of good fortune and when someone gets something good, there’s left for the rest of us.

As you’re sitting here, you can probably think of one or two people who are for you. A parent or grandparent, a friend or teacher. But I believe there are way more people for you than you know. I am blessed to be from Hog-Eye country, and while individually we may be flawed, as a community there is nowhere better. We are for each other. I think I can prove it to you. If you are here today and you are for these students, not just the one you can to see, but for them all as a group, would you please stand.

Graduates, these folks and more at home today, are for you. We believe in you. We know that your story is still unfolding but we are so privileged to be a witness to it. And while we don’t know how your story is going to end, we know this – you only get one. Fill it full of passion, hard work, keep writing your story when things get tough, write something new, fill it full of good people, and whatever you do – make your story a really good read.

Today I am linking up with Tania on Wednesday’s Wardrobe. Take a look at her fabulous self.