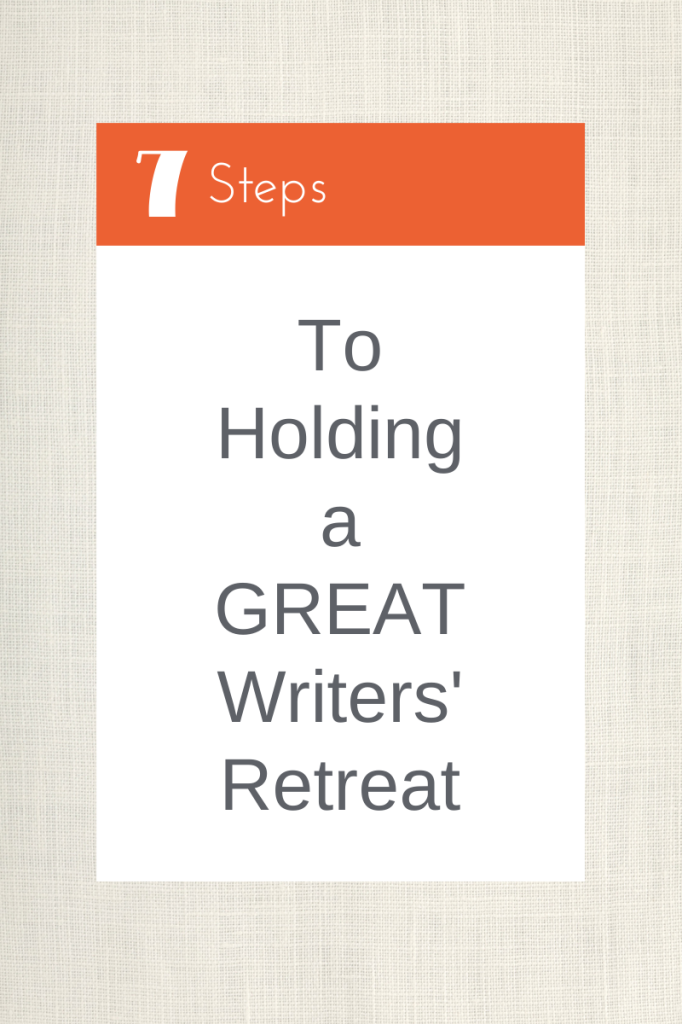 I’m in an incredible critique group, one full of fun people who take their writing seriously. A few months ago I floated the idea of us holding our own Writers’ Retreat and EVERYONE was interested. By the time we’d finalized the plans, 7 out of the 8 of us had made arrangements to attend. I’m not exaggerating when I say I think it was the single most helpful thing I’ve done for my writing this year and I think most of the group would say the same thing. If you think your group would benefit from a writers’ retreat, I’m happy to share what we did to make it successful.

1. Make it Easy to Attend

We all live about 1.5 hours away from the Georgia mountains where rental cabins are plentiful. I searched for something that had plenty of beds, (we’re friendly, but not THAT friendly), that gave us privacy (we had one lone male among us) and that was affordable. I found several places that would have been under $75.00 per person for the weekend.I narrowed it down to a couple of different cabins, then emailed the link to everyone to see what they thought. Little did I know that one of our members had her OWN personal cabin in the mountains and sweetly offered it to us for free. We carpooled so that no one had to make the trip alone. Close, affordable, easy – the first step in making your retreat a hit.

A couple of weeks before the retreat, we divided the meals into sections – Friday dinner, Saturday breakfast, lunch and dinner, Sunday breakfast – and let people choose a meal they’d provide. Everyone brought snacks to share, as well as their favorite beverage. Several members of our group were gluten-free, so we shared recipe ideas before hand. Because we split everything, each person only had one meal to worry about, then they were free to concentrate on writing.

We brought along a white dry-erase board and the first thing everyone did upon arriving was to put a GOAL on the board for everyone to see. My goal was to finish revising the first 9 chapters per my editor’s instructions. Plotting, a set number of chapters, figuring out the ending – the goals were as varied as our group – but I’m happy to say that each and every one of us reached our goal before the retreat ended.

4. Be Serious about the Writing

We stated over and over again that our goal was to write – so write we did. We each found our own quiet spot – a couch, the kitchen table, on a bed with a laptop – and we wrote. We designated the deck as a “Feedback Zone”. If you were on the deck, it was assumed you were happy to talk plot points, etc. Otherwise, we left each other alone to write.

Because everyone was arriving at different times, we decided to hold our first critique session Friday night after dinner. With 7 of us, it went long, but we were patient and listened to everyone. After we were done, we all disappeared into our writing worlds to continue working for another two hours, then we regrouped for a final critique before bed. The next morning, we had a mini-critique at breakfast,  then a lunch critique, afternoon mini-critique, dinner critique and a final one before bed. This sounds like a lot of stopping but most of the critiques happened quickly. Imagine 2 – 3 hours of uninterrupted writing followed by a nice meal, a quick briefing on what’s changed in the last few pages, and then more writing. It was heaven.

6. Consider Leaving the Internet At Home

The cabin where we were staying didn’t have internet service, and cell coverage was spotty at best. Since we knew that going in, any research we needed to do was either done before hand, or postponed until we got home. It didn’t hurt us at all, in fact, I’d say it was one of the reasons our weekend was so successful. No one stopped to check email, update Facebook, or read their twitter feed. Those things I’ve just mentioned may be significant reasons we NEEDED a writers’ retreat. If you can, do without it. If the space where you’re staying has it – consider turning off the modem except for certain times during the day.

Having friends who understand the joys and difficulties of finishing one more chapter is a blessing. We laughed, got to know each other better, and encouraged one another throughout the weekend. We all left the cabin saying we’d like to do it again, soon.

I’ve often heard it said that we make time for the things we value. If you value writing – make your retreat plans now.